The hidden side of Tiwanaku 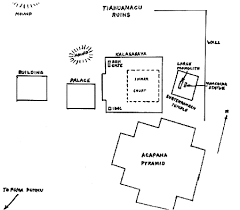 Our spiritual journey really began with our visit to the ancient Pre-Inca site of Tiwanaku. We had high expectations of this exceptional place and were confused to find that we did not feel good at all once we arrived there. Our moods turned as soon as we arrived there and we didn’t feel joyful at all. Where did this gloomy feeling come from? As we’re gathering more information about this special site, we begin to understand why we didn’t feel comfortable there.

Tiwanaku is an archaeological site in western Bolivia, South America, near the south-eastern shore of Lake Titicaca about 72 km (45 mi) west of La Paz. It was the ritual and administrative capital of a highly intelligent major state power and it served as a religious center.
In order to expand its reach, Tiwanaku used politics to create colonies, negotiated trade agreements (which made the other cultures rather dependent), and established state cults.

Tiwanaku, now situated in the arid Altiplano region, was once a flourishing port. Charles H. Hapgood presents the evidence for this, in his book “The path of the pole”. Some of the evidence: the site is surrounded by a canal, traces docks have been found just north of the ruins and many peculiar rectangular depressions near the ruins are thought to be harbour basins.

There is at present no way to determine when Tiahuanaco rose to it’s supreme height, or when its culture was obliterated.

And then there is the sun gate

Professor Schindler-Bellamy and the American astronomer Allen discovered and maintained their vision of the sun gate being a calendar, despite huge opposition from the scientific world. The result of their research was a book of over 400 pages, The Calendar of Tiahuanaco, published in 1956. Thorough analysis of the Sun Gate sculpture revealed the astonishing fact that the calendar is actually, and pre-eminently a unique depository of astronomical, mathematical, and scientific data- the quintessence of the knowledge of the bearers of Tiahuanacan culture.

Here is come of the amazing data they were able to recover form the sun gate:

The information we now have about Tiwanaku and the sungate all indicate that this was the home of a highly evolved civilization that had skills that we can only dream of. Many people admire this civilization as being an enlightened civilization and attribute a near god-status to the individuals that were in charge of Tiwanaku society. Their knowledge of the planets and equinoxes can by some people only be explained by the fact that they were blessed by the gods….

Now here’s why I don’t agree with the vision of an enlightened society:

After our visit I had a vision of underground chambers and pyramids underneath the Tiwanaku site, and especially underneath the Akapana pyramid. This is the main pyramid of the Tihuanacu site and is a cross-shaped pyramidal structure that is 257 m wide, 197 m broad at its maximum, and 16.5 m tall. At its center appears to have been a sunken court.

I received this article the day after my vision : Bolivia detects burried pyramid underneath Tiahuanaco site

My intuition is that the most important place of this site is sitting underneath the Akapana pyramid. There is an energy point, a vortex or portal, that was used in the beginning for the benefit of all. When certain members of this society decided to use this energy to benefit only a few, they hid and closed this energy point from the people. This way they were able to tap into the powerful energy and only use it for the purpose of personal wealth, prestige & influence.
This would also be an explanation for the human sacrifices on the pyramid : they served as a means to scare the people away from the pyramid and as a way to invite dark energies to sustain the hierarchical power structure of the society. I feel that this civilization received its information from elsewhere, from more developed races and at one point started misusing this gift, which eventually caused their downfall.

What can we learn from this ?

When a civilisation is completely out of balance, misuses the knowledge it acquired and there is too much excess, it always declines. This was the case with Atlantis (misuse of technologies) & the Roman empire (too much power & decadence) and it happened to the Tiwanaku society, among many, many other civilizations. We are blind if we do not see that we are repeating the same mistakes, and that the decline of our civilization is inevitable, unless we change course.

The comparison with our culture today is striking : there’s an elite that frantically keeps certain universal knowledge to themselves. They count on the ignorance of the masses and they use fear tactics (warfare and economical crisis) to be able to keep their supremacy in place.
They are not in charge because they are more talented than you, because they work harder, but because they know how to manipulate universal laws for their own benefit. Their only advantage is that they possess certain informations that you don’t and the fact that you don’t seize your personal power. They are often being manipulated themselves by dark entities who do much more damage to them than any benefit (wealth, fame, prestige) they could acquire from their collaboration.

We can start by ceasing to admire all that glitters and put people on a pedestal and we can start to appreciate people for who they are, not for what they have. It is not because someone « has made it » or can do things you can’t, that they’re worthy of your admiration or your confidence. There is no such thing as people that are superior to you, everyone has his own specific talent and no-one can claim to be better than you because their talent differs from yours.

We included the Tiwanaku site in our earth ritual and meditations to liberate the energy from the dark influence it endured. Since the writing of this article, we received some complementary information from one of the energies that noticed us on lake Titicaca after the earth ritual. Little by little we reconstitute humanity’s history this way and we learn from the dynamics that caused the downfall of past societies, allowing us to steer away from these mistakes in our current global society.

We share this information because we feel that the world is moving into a new era. We are leaving the dark ages (or rather centuries) and we are moving towards more consciousness and harmony. The more you are informed about the real history of humanity and the real dynamics of this world, the more you will be able to let go of any dependences and become a full, empowered individual and make the transition more easily.

Sources : Wikipedia, Frontiers of anthropology, « The path of the pole » Charles H. Hapgood.