Reconnecting to pure life force in the Elqui valley. 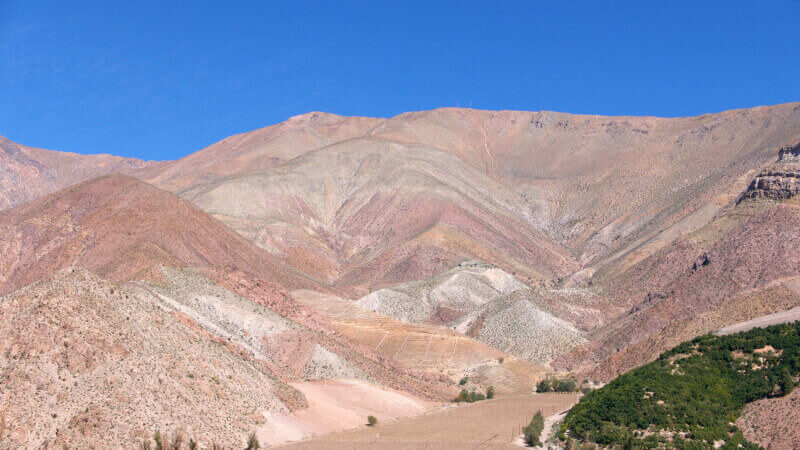 It’s late august and we’re flying to Santiago de Chile to meet up with Nadège, a friend from Paris and head off to the Elqui valley together. We don’t know why we’re going there yet, as usual we’re following our intuition.

The Elqui valley is located in the Coquimbo region in Chili, at 400km to the North of Santiago and just South of the Atacama desert. Before arriving in the heart of the valley, we pass through La Serena, the coastal town where the Elqui river flows into the pacific ocean. From here on we just follow the river upstream and drive along the Road to the Stars to arrive at our destination: Pisco Elqui, a small and friendly village, our home for the next 2 weeks.

The force of the earth.

Once we arrive in the valley, our first impression is that of a lovely and peaceful place, we see steep hillsides covered with vines on either side of the river and the countryside that is dotted with authentic little villages. We also notice the dry earth, a pale-brown dirt colour, a soil that looks thirsty. This doesn’t surprise us, seems logical with less than 70mm of rainfall a year.

It’s when we talk to the locals that we find out that 25 years ago, this valley was a true garden of Eden: lush vegetation, fragrant flowers and tasteful fruit sprouting up everywhere. All this natural exuberance and abundance sustained by the waters of the river Elqui.

The cause of the current state of the valley? Over-exploitation of the soil by the winemakers, the introduction of transgenic vines and the prolific use of pesticides and herbicides that killed off all biodiversity in just a few years’ time. A true environmental catastrophe…

And yet… We feel the earth’s powerful energy very strongly here. There is an undeniable force that is omnipresent in the valley. An energy that is tangible to anyone that resides here, even for a short while.

During the next couple of days we receive more information: the Elqui valley is the antipode of Lhasa (Tibet) on the globe (there’s always a powerful connection between a place X and it’s antipode on the earth) and an extremely powerful magnetic pole (because of the magnetic rock that the mountains in the valley are made up of).

We start to understand why we feel such a strong energy in this place. Even if at first sight it might seem to lack energy.

It’s a soil that reconnects us to our primordial strength, to our life force, to the force that is responsible for us being alive and persisting to exist on this planet. It’s the same raw life force that stimulates us to reproduce and assure the continuation of life.

The whole region is beaming with the energy of the root chakra. Very quickly we are confronted with this energy at first hand, as several among us experience a spontaneous activation of the Kundalini energy, simply switched on by our presence in this place.

The serpent of light (Kundalini) undulates in the lower part of the valley during the day, setting off different reactions in the animals and people that live there. When daylight starts to decline it climbs on top of the mountains and this is where it becomes visible. At twilight on the second day we start seeing waves of energy on the mountain ridge that surround Pisco Elqui. We perceive these waves as energy moving upward and they manifest as lights that emanate from the mountain tops. We see them as vertical northern lights, predominantly in the colours purple, violet and pink.

While we fully connect to the earth during the daytime, at night our attention turns towards the sky. The Elqui valley is above all well-known for observation of the stars: it houses 70% of the world’s astronomical observatories and the most powerful space camera in the world. The Chilean government took measures to protect the visibility of the sky: the electric power is limited in the area, illuminated billboards and LED lighting are not allowed.

At nighttime, during a horseback ride underneath the most amazing starry sky, I find the serpent again, it has now thrown itself into the cosmos: the milky way stands out splendidly against an ink-black backdrop, more brilliant and sparkling than ever….

It’s pure magic to be able to distinguish the sagittarius and scorpio constellation just above our heads at every nightfall, to count the falling stars, follow the orbit of satellites and finish in beauty with the Orion constellation, that were able to locate thanks to it’s brilliant belt (called the three Maries in Latin America). I know that we’re approaching daytime when I stop to admire the great red giant, the star Betelgeuse, that symbolises death and rebirth in many ancestral cultures.

We conclude our stay with an immense feeling of gratitude towards the valley and the cosmic forces that stir in her belly. She confronted us with her strength and made us look straight into the indestructibility of life and as a result our own strength as well.

Because we didn’t have any expectations, because we didn’t look for anything, we merged with the valley, we adapted to it’s cyclical rhythm of death and rebirth, we blended in with her, connecting the earth to the cosmos. She turned us upside down, inside out and put us back into place. She realigned us, with unending joy and gentleness, but with great strength and unmeasurable force as well.